About State of the Union History 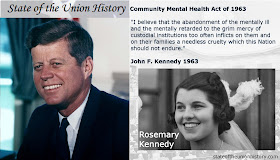 There is no dispute that President John F. Kennedy's passion and pleas to combat "the abandonment of the mentally ill and the mentally retarded to the grim mercy of custodial institutions" helped to revolutionize the way we treat mental illness and intellectual disabilities.  It was because of JFK that Congress passed bold new legislative program known as the Community Mental Health Act of 1963, but today we view Kennedy's passionate pleas in a little different light than they may have been in 1963.  Today, we know that Joe Kennedy Sr, John's father subjected his daughter Rosemary to an experimental lobotomy that left her severely disabled and with the mental capacity of a toddler.

President John F. Kennedy's sister Rosemary was born with an intellectual disability and other mental health issues.  Rosemary was the third child and first daughter of Joseph P. Kennedy Sr and Rose Fitzgerald.   Upon her birth, the doctor was not available, and the nurse ordered Rose to keep her legs cross so that the baby's head would stay in the birth canal.  Little Rosie stayed this way for two hours and suffered a harmful loss of Oxygen.   Rosemary was educated at schools separate from her siblings in Pennsylvania and Rhode Island, but as she grew older her condition regressed.  Rosemary would become increasingly irritable and began experiencing seizures along with violent rages. Rosemary was sent to a convent school in Washington D.C. where she frequently snuck out at night.   Because of her activities, her voluptuous figure and her tendency to attract men, her father worried that her behavior, especially if it led to an unplanned pregnancy would shame and embarrass the family.  To ensure that Rosemary would not damage his or his children's political careers, Joe chose to schedule Rosemary for an experimental lobotomy surgery.  The surgery was done in secret and when horribly wrong. In 1941, at age 23 Rosemary Kennedy emerged from the surgery severely disabled and with the mental health capacity of a toddler.   After the surgery, her father put her in a Catholic facility for the mentally disabled in Jefferson Wisconsin, hidden from public view and hidden her siblings.   For twenty years, Jack and his siblings were unaware of their sister's condition, but when their father Joe Kennedy suffered a severe stroke, they learned the truth of her sister's disappearance.  It was 1961, during JFK's first year as president that he learned of Rosemary's lobotomy surgery and her condition, but it would be another 26 years before the rest of the world would find out about it.

While the truth of Rosemary's secret lobotomy would not be revealed to the rest of the world until 1987, one can only imagine the impact this revelation had on John F. Kennedy as he became president in 1961.  JFK never publicly talked about his sister's lobotomy, but he did reveal to the nation that his sister was intellectually disabled and institutionalized for years. Kennedy shared his sister's early struggles to appeal to the nation for new treatment programs for those suffering from mental health issues.   According to a New York Times article from 1964, President Kennedy's appeals to the nation did more to remove retardation from the closet than any single action in the history of the nation.   Not only did President Kennedy design a bold legislative program to combat the "the abandonment of the mentally ill and the mentally retarded to the grim mercy of custodial institutions", but he publicly revealed that one of his sisters was stuck in one of these institutions for many years.  These appeals led to the flow of funds for education and job training, as well as research, treatment and aftercare for the intellectually disabled.

Kennedy's bold legislative program became known as the Community Mental Health Act of 1963.  In February of 1963, Kennedy described mental illness and mental retardation as being "among our most critical health problems", effecting more people, requiring more treatment, causing more family sufferings than other health problems.   The cost to the taxpayers was enormous, with about $1.8 billion of federal funds being spent on mental illness and an additional 600 million for mental retardation.   Kennedy urged a new bold approach, including prevention, research and new treatment programs.   Central to his new program were comprehensive community mental health centers.  These new cares centers would no longer be directly funded by the federal government, but rather he urged Congress to authorize grants to the states for construction of these mental health centers.   The federal government would provide up to 75% of the funding in early months, but then turn over the funding to state and private enterprises. It was a major shift in federal policy, away from institutional-based care and to more out-patient and alternative treatments. In Kennedy's last State of the Union address, Kennedy urged Congress to take on the task of passing his Community Health Act and address the "abandonment of the mentally ill and the mentally retarded".  One can only imagine, that memories of Rosemary were fixated in his mind as he thought of the 530,000 patients currently (1963) housed in public mental health institutions with over 3,000 patients.


"Finally, and of deep concern, I believe that the abandonment of the mentally ill and the mentally retarded to the grim mercy of custodial institutions too often inflicts on them and on their families a needless cruelty which this Nation should not endure. The incidence of mental retardation in this country is three times as high as that of Sweden, for example--and that figure can and must be reduced."

Very few in Congress or in the nation at the time, could have anticipated how quickly Kennedy's dream of reducing the number of those institutionalized.  By 1980, the number of patients at public psychiatric hospitals had declined by 75% and by 200 only 55,000 remained.  The numbers continued to drop, and by 2009 the institutionalized population was just 2% of what it was in 1963. Rosemary Kennedy died in 2005 at the age of 86.  After Joe Kennedy's death in 1969, the Kennedy family gradually brought Rosemary back into their lives for occasional visits.  Rosemary had learned to walk again, but never regained the ability to speak clearly, and her arms remained palsied.  In 1963, the world was unaware of Rosemary's lobotomy, and his father's decision to institutionalize her and hide her from society but looking back it seems that John F. Kennedy in some way was doing what he could to make right that which is father made wrong.

Presidency.ucsb.edu. (2019). Annual Message to the Congress on the State of the Union. | The American Presidency Project. [online] Available at: https://www.presidency.ucsb.edu/documents/annual-message-the-congress-the-state-the-union-3 [Accessed 8 Jun. 2019].