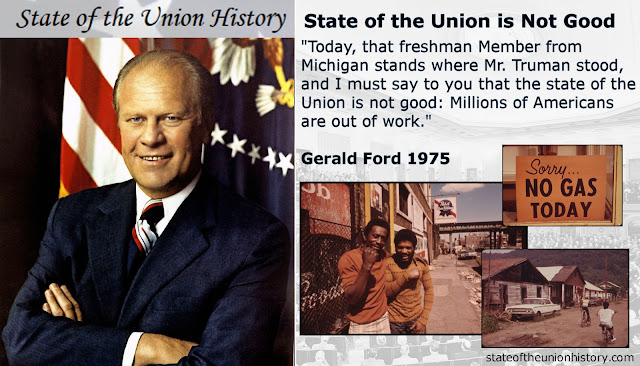 Ever since George Washington penned his first Annual address with words about the "concord, peace, and plenty with which we are blessed", every President declared that the state of our union was good.  There were challenging times, and hopeful times, but whether in times of peace or war, feast or famine each president shared something for the good.  In 1812, Madison called for "mutual congratulations and thankfulness".   In 1861, Abraham Lincoln declared "in the midst of unprecedented political troubles we have cause of great gratitude to God for unusual good health and most abundant harvests". And, in 1949 when Gerald Ford, was just a freshman Congressman standing in the back of the great Chamber, President Harry S. Truman announced, "that the state of the Union is good".   Twenty-six years later, Ford found himself standing in that very same spot as Truman and had the guts to tell the nation "that the state of the Union is not Good".

In 1971, President Nixon shocked the world when he took unilateral action to abolish the Bretton Woods system of financial exchange, ending the U.S. dollar's convert ability to gold.  "Nixon Shock" as it was called was originally celebrated in the United States, but after a short period of growth in production, the U.S. Dollar began to plunge.  Adding to the economic trouble, the Organization of Arab Petroleum Exporting Countries (OPEC) called for an oil embargo in October 1973 targeted at nations that supported Israel during the Yom Kippur War.  The Embargo added to the already strained U.S. economy that had grown increasingly dependent on foreign oil. Oil prices skyrocketed, and consumers had to wait in long lines at the gas pump.  The fall of the Bretton Woods System along with the 1973 oil crisis were believed to be chief causes of the 1970s recession.   Nixon had resigned, and the debate over extreme corruption still raged on with new revelations about the nation's law enforcement agencies undermining civil and political rights of America.    Crime rates were soaring, the federal deficit was growing, the national debt was ballooning.  When Gerald Ford assumed the presidency, the country was in a mess, and Ford had the guts to say, "the state of the Union is not good".

"Twenty-six years ago, a freshman Congressman, a young fellow with lots of idealism who was out to change the world, stood before Sam Rayburn in the well of the House and solemnly swore to the same oath that all of you took yesterday--an unforgettable experience, and I congratulate you all.
Two days later, that same freshman stood at the back of this great Chamber-over there someplace--as President Truman, all charged up by his single-handed election victory, reported as the Constitution requires on the state of the Union.
When the bipartisan applause stopped, President Truman said, "I am happy to report to this 81st Congress that the state of the Union is good. Our Nation is better able than ever before to meet the needs of the American people, and to give them their fair chance in the pursuit of happiness. [It] is foremost among the nations of the world in the search for peace."
Today, that freshman Member from Michigan stands where Mr. Truman stood, and I must say to you that the state of the Union is not good: Millions of Americans are out of work.
Recession and inflation are eroding the money of millions more.
Prices are too high, and sales are too slow.
This year's Federal deficit will be about $30 billion; next year's probably $45 billion.
The national debt will rise to over $500 billion.
Our plant capacity and productivity are not increasing fast enough.
We depend on others for essential energy."

Presidency.ucsb.edu. (2019). Address Before a Joint Session of the Congress Reporting on the State of the Union. | The American Presidency Project. [online] Available at: https://www.presidency.ucsb.edu/documents/address-before-joint-session-the-congress-reporting-the-state-the-union-1 [Accessed 27 Feb. 2019].